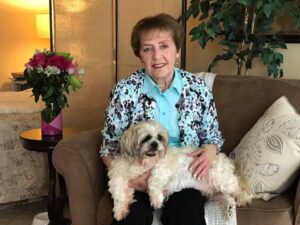 Judith Elizabeth Peterson (Koetter) age 79, formerly of Seattle, WA and most recently of Riverside, RI passed on to eternal life on December 17, 2020 after a one month stay at Kent Hospital in Warwick, RI where she was being treated for respiratory complications of Covid-19.

She was born April 22, 1941 in Wabasha, MN, the daughter of Joseph B. and Gertrude (Frisch) Koetter. She grew up on the family farm in Altura, MN with her siblings, Carol Strouse, Thomas Koetter, the late Margaret Buie, the late David Koetter and the late Jolene Flatt. After graduating high school, she moved to Seattle where she worked as a medical secretary and where she subsequently married the late Dr. Theodore Steig Peterson, DPM.

They raised two children together in the Inglewood neighborhood of Kenmore, WA, Bruce W. Peterson (Michelle Gonner) of Monroe, WA and Lisa M. Settipane (Robert) of Riverside, RI (where Judy lived the last four years of her life). Judith maintained a very hospitable and loving home on Inglewood Lane during the 1970s and 80s where many, including Deanna Muller, regarded her as a second mother. She was also the stepmother to Dean R. Peterson (Vera). She was “Gramma” to Jamie Peterson, Chris Peterson, Billy Peterson, Travis Settipane, Kyle Settipane, Justin Settipane and Hunter Peterson. She also leaves behind, her beloved shitzu, Sammy, who was her constant companion for over ten years.

She came to her faith in Jesus through a neighborhood Bible study in the mid-1970s and most recently attended Barrington Baptist Church in Barrington, RI, which was also her favorite charity.

Because of Covid-19, the family will not be receiving visitations. A memorial services for Judith Peterson will be held at a time and place yet to be determined.