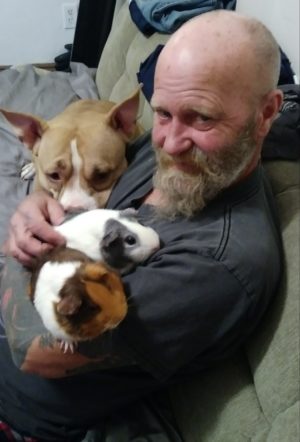 On May 1, 2020, David Scott Lenihan, 54, of Central Falls RI was called to his eternal resting place due to cancer.

He entered this world on January 27, 1966, in Pawtucket, RI, born to James and Noreen Lenihan. He is survived by his mother Noreen (Davy) Lenihan of Central Falls, RI, life partner Jessica Cummings-Barone of Central Falls, RI, and two sons Christopher N. McMurtery and Kenneth W. McMurtery both of Pawtucket, RI. David is also survived by brother James Lenihan of Warwick RI, sister Cheryl Wilkinson and her wife Jessica Wilkinson, and their four children Andrew, Kyle and Hope Cornell, and Alexzandra Vasconcelos of Central Falls RI.

David was a great man loved by too many to count. His favorite things were fishing, hunting and riding his Harley. David volunteered his time to Howard Rogers American Legion Post 25 with such things as repairs and improvements and was loved by Commander Jim LaRose and all members of the Post. He was also a member of the Post 25 Disaster Relief Team. Our latest mission was in Panama Florida where the team helped rebuild homes after Hurricane Michael.

David also had a true love for all animals and all things in nature. David was a true provider to his family and close friends. David did not wish to have a formal service and the family will honor his wishes.

A bike run in his honor will be formed by his two sons and some friends. We will be having a Celebration of Life for David at HOWARD ROGERS AMERICAN LEGION POST 25 in Pawtucket RI when we are able to open again. All details will be coming soon.

As Dave would say “It is what it is…LIVE LOVE RIDE.”

In lieu of sending cards or flowers for the family, Dave would prefer you make a donation of either funds, clothing, or food to the HOWARD ROGERS AMERICAN LEGION POST 25, 25 McCullum Avenue, Pawtucket, RI 02860.  Or you may call the Post Commander Jim LaRose at (401) 641-7442.  All donations go to Veteran’s Services and community outreach programs.