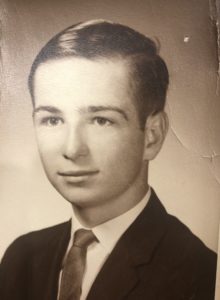 Joseph. E. Shallcross, 72, died on March 10, 2020 at the Philip Huitar Hospice Center in Providence surrounded by his loving family. Born in Pawtucket, he was the son of Irene (St. Lawrence) and Joseph E. Shallcross, Sr. A life-long resident of Lincoln, Rhode Island, he is survived by his three sons: Mark Shallcross and his wife Kelsie of Cumberland, RI; Michael Shallcross of Texas; and Matthew Shallcross and his wife Aida of Pascoag RI. He will be missed by his four granddaughters; his sister, Laureen Bitgood of Newburgh, Maine; and many nieces and nephews. He had a brother, the late William Shallcross.

Joseph served his country in the United State Army during the Vietnam War earning a Bronze Star. He worked in the printing department as a bookmaker for most of his life.