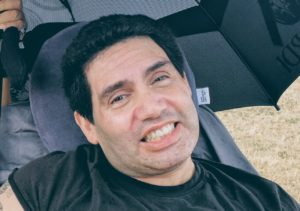 Benito was born in Boston, Massachusetts to Benito Sr. and Esperanza Santiago, November 30, 1972. Raised in the city of Boston, Benito attended college at Massachusetts College of Liberal Arts in North Adams, Massachusetts. There he joined the fraternity AXP and made many life-long friends. He made an impression on everyone he met and will be remembered for his big, bright smile.

He loved all types of music, comedy shows and was an avid Boston Sports fan, especially the Red Sox. He proudly displayed the “B” tattooed on his left arm. One of his favorite quotes was, “If you mess with the bull, you get the horns.”

He met his wife Jill in 2001 and relocated to Warwick, Rhode Island. They married in 2007 and Benito adopted her children, Anthony and Claudia. Benito was diagnosed with Multiple Sclerosis in 2005. Despite the serious diagnosis, he continued to train his body with weights and exercise daily, for as long as he could. As his condition progressed he developed significant disability and lived this past year at West Shore Health Center in Warwick, Rhode Island. There he was regarded as the star resident – a favorite among the staff.

In lieu of flowers, the family is requesting memorial donations may be made in Benito’s name to:  The National MS Society or Americares which provides PPE to health care workers battling coronavirus (Americares.org).